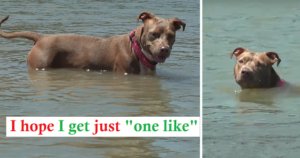 Keith “Kiwi” Soffes, a shrimp boat captain from San Leon, Texas, adores his dog Monster, who accompanies him on his daily treks out on the water.

However, a recent expedition ended in tragedy when Monster went overboard. Despite the fact that the dog was no stranger to the sea, having joined Keith on the boat since she was a puppy, and that it was a quiet day, the dog vanished without a trace.

Keith looked everywhere, hoping to find her, but quickly became concerned. Keith remarked, “I lost the one thing in this world that I actually loved.” “I’m completely heartbroken.”

Keith published the tale on social media, hoping Monster might appear somewhere. People online sent him a lot of love and prayers.

But, five days after Monster went missing, he received wonderful news: Monster was alive and well… after quite an adventure at sea.

Monster was discovered days after reaching the coast. Keith was taken aback after hearing her story.

Monster survived by swimming five to six kilometers across Galveston Bay to land.

Keith and Monster were happy to be reunited after many agonizing days apart.

“I couldn’t even talk because I was weeping so hard,” Keith explained. “She was smothering me with kisses.”